This is an independent blog and is not affiliated with any particular church, group or conference. The term Bruderthaler refers to a specific ethnic or cultural Mennonite heritage, not to any particular organized group. All statements and opinions are solely those of the contributor(s). Blog comprises notebook fragments from various research projects and discussions. Dialogue, comment and notice of corrections are welcomed. Much of this content is related to papers and presentations that might be compiled at a future date, as such, this blog serves as a research archive rather than as a publication. 'tag

I received my first Seed Savers Exchange catalogue about a week ago.  While this was too late for any real plantings – even in this late spring – but there were some wonderful ethnic surprises from my Russländer Mennonite heritage.
Established in 1975, Seed Savers Exchange (SSE) is a mail order heirloom seed company based out of Decorah, Iowa.  The catalogue itself is a plant-lover’s dream-come-true featuring professional photography, classic plant and seed descriptions with the expected “Green Thumb Tips” and seed varietals from our collective immigrant, Native American and North American pioneer pasts.  While we commonly feel a sense of proprietorship in our local nurseries and gardening centers, SSE actually is a member-supported non-profit.  This is definitely a company for plant lovers and history lovers to check out.

Back to the Russländer; one of the new heirlooms featured in the 2011 catalogue is the Russian Pickling cucumber which SSE traces back to South Dakota Russlander Daniel L. Flyger who claims the seed was “brought to this area by German-Russian immigrants in the 1870s,” (SSE 2011 Catalogue, p 18.)  A quick consultation of Russian Mennonite food historian Norma Jost Voth indicates that cucumber pickles were not a new thing to American Russlander pioneers but were in fact a tradition they brought along with them from their colonies in Eastern Ukraine, “The most popular Russian vegetable is the cucumber, especially in the form of pickles.  Even today, dill pickles and sauerkraut are often the only vitamin foods some Soviet people get.  There are sections of the Soviet Union where no green vegetables are available throughout the long winter months … dilled sour pickles … took the place of salads and vegetables in the winter menu.  Much pickling, preserving and canning were woven into the pattern of everyday tasks during the summer,” (Voth, 443).  Earlier she writes, “In midsummer cucumbers were harvested almost daily – picked dew-fresh in the morning – and packed into large crocks and wooden barrels filled with brine and covered with a thick layer of grape leaves.  They were eaten all summer long, often with Bulkje (homemade white bread) and butter for a refreshing afternoon Faspa served outdoors at a table under the spreading pear tree,” (Voth, 443).   “Pickles were made in wooden barrels and were made to eat fresh,” she quotes Anna Derksen Rosenfeld of Steinbach, Manitoba, “People didn’t have glass canning jars until later,” (Voth, 443).
The SSE catalogue identifies their heirloom Russian cucumber seeds as originating near the industrial town of Perm in central Russia.  It was not uncommon for Russländer Germans and Mennonites to immigrate to central Russia as arable land became scarcer in Ukraine or as more Russländer left ancestral farms and villages looking for work in the new factory towns.  It is not unlikely that these cucumbers might have appeared in Russländer gardens along the Volga, Dneiper or Molotshna Rivers.
The true discovery for the ethnic Russländer in this catalogue though is the Cream of Saskatchewan – a true representative of the fabled white watermelons of Russian Mennonite lore.  White watermelons were essential for making Süare Arbusen (watermelon pickles) and for the essential Mennonite sweetener – white watermelon syrup.  Again, Voth takes us back to Ukraine to the Russian-Mennonite Baschtan:
“Every village had its melon patch – planted early in the spring, tended by the children and guarded by an experienced old Russian man who might enjoy this job. … At the peak of the season, watermelons left the field by the wagonload.  Some went to market.  The choicest and best were saved for the table.  Little ones were sorted out for making pickles.  Many went into the making of watermelon syrup which was used as a spread and in baking.  This syrup is remembered with great fondness by the women who used it and by all those who ate the wonderful Kuchen and Siaroppspäpänat (syrup peppernuts) sweetened by its special flavor,” (Voth, 424).
Voth quotes Kaethe Kasdorf Warkentin for a description of the Russische Arbus which closely resembles the Cream of Saskatchewan offered by SSE – “The watermelons in the Chortitza Colony [Ukraine] were like cantaloupe.  These were what they called Russische Arbus, but they were white inside.  They were also called Sockaarbus (sugar watermelons).  They were cream-colored inside.  When you ate two or three pieces, you had to pull your fingers apart, they were so full of syrup.  Those were the ones used for making syrup,” (Voth, 424), Margaret Klassen Sawatsky, “We used melons which were thin-skinned, a melon with a cream-colored center.  We used the syrup for the table and also sold it,” Voth, 424) and Henry B. Tiessen, “This amber brown syrup was prized for its good flavor.  Eaten for breakfast on rye bread, spread over pancakes or used as a sweetener in baking peppernuts and cookies, it was a staple in every household,” (Voth, 424).
SSE describes their white watermelon as “Brought to Saskatchewan by Russian immigrants.  Does well in cool northern climates. … A rare treat with sweet white flesh, exceptional flavor.  Pale green skin with dark stripes.  Very thin rind, must be handled with care – strictly garden to table,” (SSE 2011 Catalogue, 68-69).
A special historical note, Voth records testimony from Mia Reimer DeFehr and Anna Derksen Rosenfeld regarding the help these small watermelons played in helping the Mennonite villages survive the great famine of 1920-21 in Ukraine:  De Feher – “’some of the farmers in the Kuban accepted aid from the American Mennonites.  Most were able to survive by means of their cornmeal, watermelon syrup and sunflower oil.’  Syrup helped make new dishes palatable,” and Rosenfeld, “There was no sugar in later times … It was scarce.  But we had so many watermelons and everyone made watermelon syrup,” (Voth, 425).
Returning to pickles for a moment, Voth describes how watermelon pickles were made, “Pickling by fermenting which is also called “brining” is done without vinegar or cooking.  Small, sweet watermelons (not more than three and a half pounds in size), green tomatoes, vegetables and fruits were placed in salted water with herbs and spices and left to ferment for several weeks at lower-than-room temperatures.  The results were delicious.  Brined watermelon went especially well with pork.  ‘It needed something to cut the grease,’ Mother would say,” (Voth, 443).
Make no mistake, the Seed Savers Exchange catalogue caters to many different ethnic garden heritages other than the Russländer – each packet of seeds from the past convoking its own set of memories, tales and favorite food traditions.  As garden catalogues go, this is a must.  Might I recommend a small fastpa (Russian Mennonite lunch or tea) of some modern-day refrigerator pickles, traditional bulki and some great reading material?

Slice cucumbers fairly thin and add chopped onion and green pepper.  Mix other ingredients together to form brine.  Do not heat.  Pour over cucumbers and place in refrigerator.  These pickles are ready to eat in 3 to 4 hours and will keep for some time in the refrigerator.  You need not can them.  This makes a rather large batch of sweet pickles.

Dissolve yeast in warm water.  In big pan put water, sugar, lard or shortening, salt and mashed potato, add yeast mixture.  Add flour gradually making dough stiff enough so it can be handled easy.  Knead until smooth.  Let rise until double in bulk about 1 ½ hours.  Punch down and let rise again; about 30 minutes.  Shape into loaves – 3 large ones or 4 medium-sized ones.  Bake at 375 F for 50 to 60 minutes.  When done, remove from pan and brush with fat (or butter).
Note from Mrs. Teichroew:  If a housewife ran out of bread and it was not finished by the noon meal, some fat was heated and pieces of the dough were cut off about the size of a small bun and flattened a bit and fried in hot fat like doughnuts and served with the meal.  Some ate them plain while others dunked them in syrup and enjoyed.
Note from Mrs. Nancy Wall:  In my family we called fried pieces of white bread dough “Elephant Ears” and would cover them with butter and a cinnamon-sugar mixture – or use them as a base for sloppy joes with a slice of American Cheese.

Sockaarbussiarupps – Mrs. Norma Jost Voth, Mennonite Foods & Folkways from South Russia, v 1
Remove all pulp from the inside of a watermelon.  Mash pulp and strain through cheesecloth to remove all seeds and particles of pulp.  Add 1 cup sugar to 1 gallon of watermelon juice.  Place in large kettle and boil on high heat, stirring until the sugar is dissolved.  Boil on full rolling boil until it reaches syrup consistency.  Syrup will become reddish brown in color.  When it begins to thicken, reduce heat to medium and watch carefully, stirring to prevent it from burning.  When syrup coats the spoon, it is finished.  Remove from heat.  Pour into sterile hot jars and seal.

Ms. Voth's book is out of print and not readily available used, however, if you come across a copy, be sure to pick up a copy of this cultural archive: 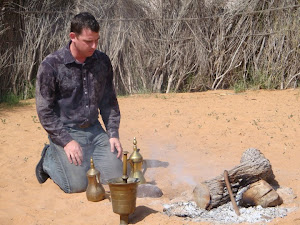 "Q: What do you call three Mennonites stuck in a blizzard?

Check out Menno-Quotes page for more ...

How do you define your relationship to Anabaptism? (Click all)

Is the Mennonite identity an ethnicity, a religion or both?

Is the Mennonite Church too ethnic? 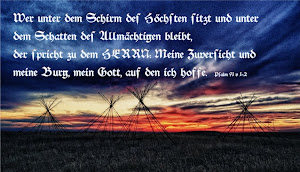 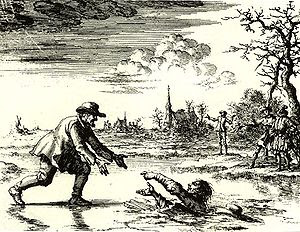 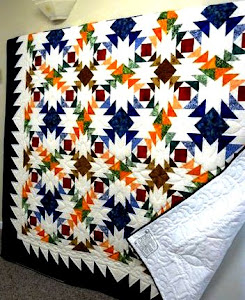